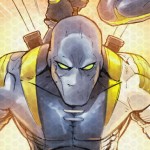 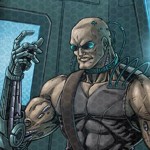 Powers: Through his martial arts training under the tutelage of Dragonfire, Hunter has focused his Chi providing him with enhanced reflexes, vision, speed, and healing abilities.

Background: A 17 year old high school student at Huntington Prep, Hunter is the leader of the team Dragonfire, named after his former master. Witness to the death's of both his mentor Dragonfire and best friend Shadowmask at the hands of Talon, Hunter has sworn revenge.

Hunter had founded the team when he discovered fellow classmate Darren Dobson, also know as Decker, half alive after being attacked by one of Talon's cybernetic mercenaries. Along with classmates Eastern Star, Essence, and Momentum, Hunter brought Decker into the fold to help him stop Talon and protect the biogenetic virus data stored in Decker's cybernetic implants from falling into the wrong hands. He is a martial arts and weapons master, primarily using bow, nunchakus, and katana.