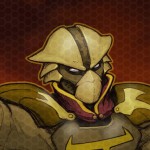 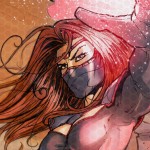 Background: Raised and trained in a small village in North Korea, at 20 years old Tae Sun escaped to South Korea with the help of a U.S. special ops agent, Kincaid Wilson. Tae Sun and Kincaid developed a close friendship until Tae discovered that Kincade was secretly running a child slavery ring throughout the Far East. Many of the children were being sold to warlords, criminal prostitution rings, or killed. Under the visage of Dragonfire, Tae took down Kincaid's mercenary army and operation, narrowly escaping with a small group of children, two of whom he could not send home and raised in hiding in the Taebaek Mountains. Several years later Kincaid, now known as Talon, tracked Tae down, killing him and Shadowmask, but not before sustaining critical injuries that forced him to flee, leaving Hunter alive.

Powers: Dragonfire was a master of Kumdo, Taekkyeon, Gungdo, Tae Kwon Do, and Hapkido. He could focus his Chi to achieve supernatural healing abilities and enhanced senses, strength, and agility.