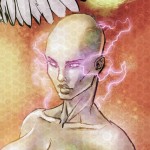 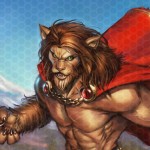 Background: A millennia ago, The Hunger, an alien hive on a path of destruction throughout the universe, was intercepted on its course to Earth by a selfless alien race. Sacrificing themselves in an effort to stop the genocide, the natives of Gamma 13 forgave their world, their lives, and their autonomy, to inhabit the vessel known as Gammahawk. The Gammahawk vessel had landed on Earth many years prior to The Hunger's expected arrival in order to prepare for the coming battle. When a redshift forced a temporal displacement, leveling a government facility, Gammahawk was transported to the near future where he encountered the peace-keeping force, The United. Now working with The United, Gammahawk seeks to locate and eradicate The Hunger before it destroys this planet as it did his own.

Powers: Gammahawk represents the combined will of 40,000 souls. A being of pure gamma energy, and the embodiment of his entire race, the Gammahawk vessel is incredibly fast, durable, operates in the most adverse environments, and can manipulate itself to generate a protective field or emit powerful blasts.